Imagine a medium where a story unfolds before your eyes - live, like theatre - but interactive - like a video game, and you have the concept behind the Immerverse - an interactive universe.

I was in a project last December, and I've been asked back again to participate in this month's project,
"Alice's Eyes," about a Bed and Breakfast. 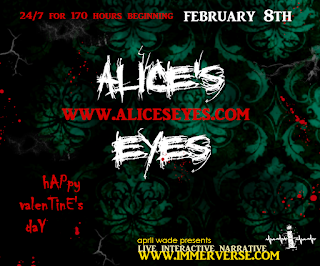 Although I won't be on camera until 8am on Tuesday the 12th (and going for more than 24 hours), you can check out exactly what the heck it is I'm talking about here and here.

Come play along. I play Hannah.

With the same live creative team assembled that brought viewers to heights of laughter, the depths of despair and the edge of sanity during her last interactive show, Wade is looking to pioneer a new form of media. This latest project, ALICE’S EYES, is a triumphant return to the horror genre, but with more than a few new added twists.

From a secluded bed and breakfast in the romantic backwoods of California, the innkeeper (and host of the live show), Norman Addams (played by J Michael Briggs) will be leading the audience into the bowels of Alice’s Eyes B&B and to the dark side of these character’s consciousness.  What will happen to them when they find themselves locked in the basement? Is anything else down there? Will their relationships crumble or just their physical bodies?

Twitter will buzz with questions for this mysterious innkeeper. The audience will chime in, imploring him to save or destroy their favorite characters as they become an integral part of the live experience. On the project’s website, www.aliceseyes.com, ‘secret security cameras’ are lying in wait for the world to tap into the terrifying augmented reality of this cagey owner and his inexplicably deceased wife.

Tune in to the chat on February 8th to unravel the mystery of this chilling Bed and Breakfast and meet the complex cast of characters that will bring these great melodramas to life. With veteran performers at the helm (Victoria Hogan, Lira Kellerman, Miriam Korn, Michele Morrow, Brandon Sean Pearson, Frank Romeo, Charles Schiell, Jake Stormoen, Christine Tanabe, April Wade, Sam Weller and Matt Wool), this will prove to be the first big innovation for the web of 2013.
ALICE’S EYES is the transmedia brainchild of creator April Wade (@IAmAprilWade) and writer Juan Manuel Rocha (@ComicsOnComics) alongside with producer Mirai Booth-Ong (@miraiboothong).  Part interactive real time experience, and part feature film, and at the crossroads of video games and live theatre, ALICE’S EYES is the next stage in the evolution of storytelling. As the IMMERVERSE website implores, the audience is asked to “Play Along.”
This IMMERVERSE project explores the complexities of love and the challenges of relationships – especially those that are put into a high-stakes game of life or death… just in time for Valentine’s Day.

Beginning at Noon on February 8th for 170 straight hours, without cutting, the cast and onlookers will enter the basement of the Alice’s Eyes B&B – perhaps never to return again. During that period, the audience will be able to interact with the characters via chat room, live stream, Facebook (www.facebook.com/immerverse) and Twitter (@immerverse).  They will be able to inform the characters (in real time) on what is happening and possibly even aid them in their escape… or demise.    There will be riddles, puzzles and polls as the audience becomes a real ‘player’ in the story, affecting the fate and emotions of each character.

“We are looking to bring a heightened level of interactivity to the audience” says Wade, “and we feel that this project is on the cutting edge of a new age of storytelling.  As filmmakers today, we have anlive, immediate platform for our stories that never existed before and I am thrilled to be experimenting with creative ways to use social media and directly affect an audience.”  With the mystery of www.IAmAgnesDay.com completed in late 2012 and www.TheMakingofCMD.blogspot.com on the horizon, Wade is undoubtedly building an audience and an ensemble of creatives to bring exciting stories to life in new, innovative ways.

This Valentine’s month, as an alternative to chocolates and roses, tune in to the destruction and terror at www.ALICESEYES.com.