How to Drive in the Rain in LA


Ha Ha! Okay, sometimes you have no choice. Sometimes you have to drive from the valley to Santa Monica at 3:30 in the rain. You can pretty much guess that this commute in dry weather takes about an hour and 20 minutes now, due to the road work on Sepulveda (why do I keep taking Sepulveda?!), but if it is raining, seriously, estimate another hour into your drive time.

I know, I know, but there's something Angelenos love to yell at one another while driving in the rain:

To these distinguished gentlemen with their fingers extended, I would like to say, "Yes it is just water. Under a layer of oil."

When it rains in LA, you can be pretty sure that it is after several weeks of sunshine and possibly a wonderful heatwave of 80 degree temps in January.

The oils in the freeway are from cars slowly dripping them, and there are a lot of cars on the freeways at all times.

Fresh rainwater mixed with oil on the freeways make it very dangerous. It's not just water, dear sir, it's automobile salad dressing!

So if you're driving on the 101 in the rain, and you're at that part near Hollywood where the speed limit drops down to 55, really actually drive that slow, okay?

And when you're on side streets, and it's raining, and there are pedestrians waiting to cross, give em a break and let them pass. Like, if you're at the Target parking lot, even, these poor people are getting wet wile you're in your car, dry, with the heat turned on. Do em a solid and let them get to the store and their cars quickly.

Also, use your horn less. Your horn is loud. Really loud. And pedestrians, who are already wet and cold and irritated, have to listen to the eardrum busting blast. It's maddening. So if you can give the guy in front of you a full THREE SECONDS to look up and notice that the light is green (as opposed to the point three seconds we seem to give our fellow drivers) everyone will be happier. It's just nice.

If your car is not compact, do not park in a compact spot.

And remember, they are called blind spots for a reason. If someone changed lanes and cut you off, do not go ballistic on them. They probably honestly did not see you. They're not called on-purposes; they're called accidents. Try not to drive in anyone's blind spot. And if someone does something completely stupid, try to let it go. I know it's hard but retaliation is dangerous, no matter how awesome it may feel while you're doing it.

Don't tailgate. And if someone is tailgating you and you can move into another lane, do it. Douchnozzles also carry driver's licenses, no matter how unfair. If you can't get into another lane, you can do what I do (and it's rather effective!): I take my foot off the brake very slowly, so I'm slowing down a pinch, and I put my hazard lights on. That makes Douchnozzle believe something is wrong with my car, so he'll get into another lane to avoid being behind me.  Try it!

We have this entitlement in LA, where we believe if we are in a lane, that lane is now ours and no one else's! I spoke to a friend who learned how to drive in LA as a 15 year old, and her instructor told her to not even put on her blinkers until she was halfway through the lane already because otherwise, people will speed up to keep you from having a safe amount of distance to change lanes.
So, give people a break. Let them come into your lane. It's okay. Sharing is caring.

Have you guys heard of The Actors Fund? Nope? Me neither. So when a friend forwarded me a link 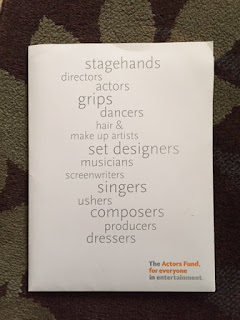 to check them out, of course I had to.

The Actors Fund was created back before tabloid magazines and society newspaper pages created actor celebrities. Actors were lowlifes; just as bad as gypsies, tramps, and thieves, and when they died, no one wanted to bury them in sacred grounds, cause, again, ewww! Actors. Gross. Also, they were usually broke (doing 99 seat theatre in LA? KIDDING), so they died with no money.

The Actors Fund was created to help bury the dead. And once it got going, people thought, you know, maybe we can help actors when they're alive too!

And they have, and they do, and they will continue to do so. They're a non-profit, not affiliated with Sag-Aftra, but have their offices in the Sag-Aftra building. Also - you don't have to be union to take advantage of their workshops - you don't even have to be an actor! You could have ANY JOB in the entertainment business - you could be a photographer, dancer, camera operator, editor, producer, stage manager, light board operator, etc. etc. etc.

Right, but what do they do? They help you get your materials current for today's workforce, for parallel and side jobs, and career changes.

They describe parallel jobs as jobs you work alongside your acting career, that also fulfills you. Side jobs are the jobs you do for the money as opposed to your passion, and they even have 'Oh Crap! Rent is due tomorrow and I need another hundred bucks!" emergency jobs. And maybe you're a person whose interests in the entertainment field has waned or dwindled, and you find other industries more exciting.

The Actors Fund has workshops! GOOD ones! VALUABLE ones! They have a Career Assessment workshop which helps you narrow down your skills, passions, and personality type, and which type of job suits your schedule, lifestyle, and desired pay. They have Resume Writing workshops, which I thought, pssh, I don't need, and was taken aback with how small tweaks majorly increased my value as a prospective employee.

There's an Art of Interviewing workshop as well, that preps you on how to sell yourself in a positive light, and highlight your creative mind and skills.

These workshops are amazing. And best of all: THEY ARE ABSOLUTELY FREE.

You must attend an Orientation that describes their background, how they can help, how they've helped, and how they'll help you, and after your first workshop, you can sign up for their job newsletter that comes out every Friday with jobs that are especially suited for those in the Entertainment world.

Orientations are EVERY Monday from 1-2:30 in the Sag-Aftra building on Wilshire, and Sag-Aftra will validate your parking.

I highly recommend you check The Actors Fund out. Take a friend. Take advantage. It's a group that was created to help all of us.
at 2:34 PM 1 comment:

Getting to the Top

I currently do not have a demo reel, but do you think I could upload a video of me performing a monologue to help my submission to be put at the "top of the pile"??

As I've mentioned before, adding a video to your Actors Access profile filters your profile to the top of the pile when casting looks at their submissions. When you consider over a thousand people will submit themselves for one role, it's a good idea to have video attached.

And good news, Jameshia, you can definitely upload a video of yourself! In fact, there's several ways you can do it:

The Easiest: Grab a friend and have them use their phone in landscape mode to record you doing ANY skill. Do you dance? Play guitar? Sing? Show off what you want in 30-60 seconds and upload it. Boom! Done!

The Moderate Level: Again, have your friend use their phone (or even better, DSLR camera in video mode) to record yourself performing a monologue.

The More Advanced: Have your two friends use their phones and your phone, set up three different angles, (one of you, one of your scene partner, and one of the wide - the both of you) and record yourself performing your monologue. Intercut the three videos so that you establish the both of you in the wide, and then focus on your performance, while cutting back to your friend listening/reacting to you. Now, you don't just have a monologue, you had a scene. It will look more produced, more professional, and could help you casting clicks on your video to watch it. Not only that, but now you have something you can show agents if you're looking for one and they ask you for some tape.