Is This Real Life?

I think the biggest challenge I've had as a storyteller was thinking I wasn't 'smart' enough to be a 'real' writer. Cause like, those are real smart people. Super smart. Something I'm not.

A published book and several published essays later, I stopped telling people I was 'merely' a blogger, but that I was a professional writer.

And of course, because of my acting and theatre background, and because I live in LA, the next logical step was to try my hand at writing pilots.

I love the creative control of it, the ability to tell stories that are rooted in my own experiences, but more than that. I have always loved making people feel emotions. Being an actress was definitely a major part of that. But with my writing, I can make people cry, I can make people laugh. I have so much storytelling power with being a television writer -- way more than I have being an actress.

Because, even with extraordinary talent, an actor can be overlooked. But a writer... with that same amount of talent, can be celebrated.

In January 2017, when I was a writer for the CBS Diversity Sketch Showcase, a literary manager was invited for a Q&A and told us that no lit rep would take a writer seriously unless they had a few pilots in their portfolio.

"Guess I better learn how to write a pilot," I thought to myself.

And I did. I read books, I joined writers groups, I read scripts, I offered notes on scripts to other writers, I joined Facebook groups focused on writing, and I wrote 3 pilots and 5 specs, and just 33 months after thinking I needed to learn how to write for television, I got the call from NBC asking me if I'd accept their offer to join the 2020 Writers on the Verge fellowship.

I am lucky. I know I am only in this program because of the help people offered to me. Friends who have given thoughtful and insightful notes on my work, people who have blogged how-to's on screenwriting so that I could search and learn from them, others who have suggested opportunities for me to join, or apply to, or all of the many countless other things.

Yes, I worked hard. Yes, I made sure I was ready. But holy shit, you guys. In comes down to this, fellow struggling actors: You are already smart enough to tell stories in ways other than just acting.

There may just be more opportunities if you learn how to see just how many paths there are in this town.


You can read the Deadline announcement here. 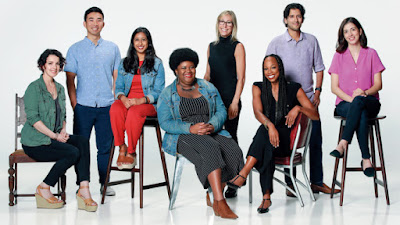