Our other three ladies of our first cast of Our Time of the Month were understandably apprehensive about the show. We have one Mandatory Rehearsal, and another final run through on the night of the show, and they were curious as to what we were really doing and how involved they actually were. They've been cast for several weeks, give their material a week after that, and that was it. No other information was given.

The (one) Mandatory Rehearsal cleared it all up for them. We ran the show, the end piece, we talked about our Storytime aspect of the "second act" and then told them what the raffle is. Not only were they Super excited about what we're doing, they are extremely bummed they can't win the raffle (It's going to be epic).

We went from having a group of cautious actors to a full on cast of very excited (and talented!) performers who have a gigantic appreciation not only for what we're all doing, but also for being a part of it themselves.

To watch an idea go from a tiny little seed to a full on blooming jacaranda tree is simply just incredible. And best of all, this tree has branches! There are so many more possibilities, and we can always write more, add more in, switch out others, and grow, grow, grow. 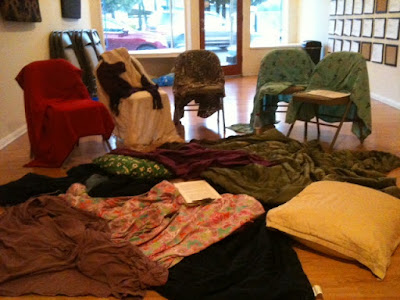 This is our rehearsal space.

It IS a pajama party after all.

I'll let you know how the first show goes.