Quite the Few Days

I'm finally recovering from one of the most awesome and hardest weeks I've had in a while. I postponed two social engagements and skipped class because I was just too freaking exhausted. And it felt GREAT to be so busy!

EPIC MONDAY consisted of being on set for 13 hours and acting for 11 of them. Because I was away on vacation in August, the director of the webseries Hollywood & Highland had to schedule the majority of my stuff for the last two days.

Usually on set, my experience has been: arrive, check in, go to makeup/wardrobe, hit up the craft service table (nom nom nom) and hang out in my designated area for a few hours while the other stuff gets done. Then I get to act! And take a ton of breaks.

Don't feel bad for me. Feel bad for the crew. They worked longer than I did.

The apartment we shot in had a/c wall units and Director Kevin Fukunaga had the wisdom to take the room tone with the a/c ON so that with the lights, the extra people and the sunlight streaming in from the windows, it never got hotter than 95 degrees. I'm not kidding, if he didn't do that, allowing us to keep the air conditioning on the whole time, it would've been around 130 or higher.

Our poor makeup artist had to keep running around blotting sweat off our upper lips and powdering our faces. I drank three bottles of water and a can of soda and only had to use the restroom once because I kept sweating it all out.

I gotta learn to censor....

The next day we were off from shooting, but I had a callback for a product I signed a confidentiality agreement for and it was at an ad agency that I had been to a few months before where I had to wait two hours to be seen. This was no exception. Ad execs and casting are both in the callback session and they TAKE TOO LONG in the beginning. They give direction, they redirect, they let the improv part go on too long, and I can't tell you how frustrating it is to get the callback notice with the monologue sides only to get to the callback and learn there are new sides, and then FIFTY minutes later are told to ignore the sides you'd been studying the whole time because you're going to improv the whole thing in the room and GET NO PRODUCT INFORMATION UNTIL ONE MINUTE BEFORE YOU GET INTO THE ROOM.

And because they're now an hour and a half behind schedule, and actors are in the lobby calling their agents, they are now RUSHING through the rest of us.

"They might have second callbacks two hours from now too, so please be around."

I almost banged my head against the wall. This is an hour away from my apartment. If I don't stick around, they could call me when I'm almost home and it'd take me another hour to get back.

FINE. I audition, they tell us to hang around, I go a nearby mall, but I don't have any band-aids for my fancy shoes and there aren't any place selling flipflops so I get into my car and drive home cause I also have class in an hour and need to leave NOW.

Traffic on the 405 at this time of day is terrible, so I take the side street Sepulveda, where they are doing road construction. I'm exhausted. I'm cranky. I only had a single piece of toast for breakfast 4 1/2 hours earlier because I didn't think it would take me so long to get home. I have low blood sugar.

I am at the point where if you just happened to glance at me, I would take it as an insult and sob hysterically.

I call my acting coach letting him know I have to skip class because my brain and body are just too tired to learn. I rain check my friend who I was supposed to meet after class to check out her new place because I have to learn my lines for the scenes I'm shooting the next day.

I finally get home. I can barely function.

AND ALL BECAUSE I GOT TO ACT THE ENTIRE DAY BEFORE AND HAD A SECOND JOB INTERVIEW FOR AN ACTING JOB THAT DAY.

The next day on set is not as hot and we're way more relaxed. Things are still going smoothly as we finish the last of my scenes, one of which is where I get a sandwich thrown at me. We did this 20 times. They kept saying I was a trooper, but seriously, getting a sandwich thrown at you is FUN! And it's funny! And I would rather be taped getting sandwiches thrown at me than serving them to people for lunch. I can't wait for the behind the scenes footage I know our director will cut together featuring every take of that. Yippee!

In the last scene we shoot, I'm on the phone and we use my actual phone for it, so in between takes and set-ups, I can take a picture or two.

Want to know what you see when you're an actress on a small set? 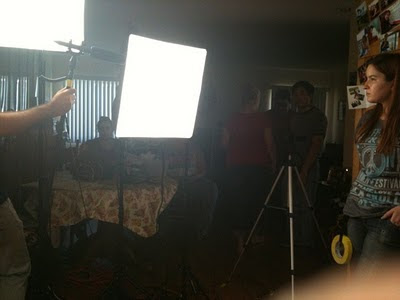 So today is catch up with life day. I get to pay bills, schedule playdates, write and go to the gym!