Have I ever told you guys how much I love to write? How many people have insisted I do stand-up? How Olivia Munn had the cushiest gig on Attack of the Show and I want to go to there and have her job?

I just screen tested for TBS, for an interstitial. You know that "Dinner and a Movie" thing TBS has where they play a movie and then between commercials there's this man and woman talking about the movie and showing you how to do an easy recipe relating to the film in some way? Like,
"Isn't Harry just so sweet to Sally?"
"Almost as sweet as this Sugar and Sea Salt Pecan Pie! You just add sea salt and C&H pure cane sugar with some Market Price Pecans and voila! O-worthy tastes good enough for your piehole!"

Well, you might not have noticed, but you just got served a commercial in the form of a recipe and witty repartee! Booyah!

Very Funny News is a pilot interstitial that serves gossip and a commercial at once. At my first audition, I learned that I wasn't auditioning for anything, they were just telling me what they were planning on doing and asking me if I wanted to be a part of it.

Do I want to be a part of celebrity gossip and jokes?! Where I would get to be in the writer's room and help craft jokes!? YES PLEASE!

It's like, oh, the PERFECT DAY JOB for me. There's no exclusivity, which means I would be free to go do other things and they project about only 45 minutes or so of actual studio time once a week, so I would be able to go to work, read the teleprompter and then go to other auditions or sets to act in other things.

Well, I was one of 16 girls they invited to screen test. They gave us all the script on Friday and said, hey, feel free to tweak, add jokes, rewrite, whatever and send it back sunday night so we can put it in the teleprompter for you.

That's test one: MAKE IT FUNNY. I changed a few words, added a few jokes, and took out one joke that just absolutely fell flat and replaced it with one that was just darn awesome (if you ask me).

Test two: MAKE SURE YOU KNOW HOW TO PRONOUNCE ALL THE WORDS. When I walked onto the set, the director told me that everyone was mispronouncing "Maldives," "Mirren," and "Galifianakis." This is what the internet is for. Research!

Test three: GIVE THEM WHAT THEY WANT.

I was the very last girl to go. This meant a few things: 1) they're tired. They've been doing this since 11am. It's 8pm now. They just want to go home. But no, The Struggling Actress has to audition before we can all leave. Grrreat.

How to combat that? Be charming, be funny, be bubbly, be someone they want to work with.

2) I'm probably going to get 2 takes, tops. I'm the last girl. They're over it by now. And they probably have a girl in mind who they have already been envisioning as the host for the last few hours.

How to combat that? Be better than she was. Make them forget all about her.


The runner brought me to a dressing room with like, four couches, a tv, and seven water bottles. 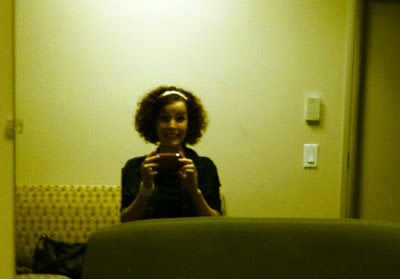 Here I am! In a dressing room that might one day be mine!

I asked the runner how it was going, and he said not too bad, that they were a little ahead of schedule and everyone is still in a good mood, for the most part. Awesome. What's been the biggest issue for the actresses so far? Mispronouncing the words, he said. Of course.

If you want to make it in this business, you really have to know what you're doing. There's no excuse anymore, what with smartphones and the ability to go to dictionary.com and hear how the word is actually pronounced.

I go over my copy, making sure I stress the right words to get the jokes right and to highlight the brilliant wordplay they had that I kept.

The runner brings me to set and the writer/producer shakes my hand and seems genuinely happy to see me. That's such a nice feeling. "Lira! You're here!" Yay! Love that.

I run the mic up my dress, tuck it into my tights, go to my mark in front of the green screen and take a look at the teleprompter. It's the smallest one I've ever seen. But hey! I can do this!

The director is in the booth with a few other people and he told me that he just wanted to go over a few words with me.
"MALL-deeves, Mirin, Gala-fin-a-kiss!" I smile. He laughed and said that they've been having problems with the pronunciation all day. "That's the problem with pretty girls, " I said, "we're all stupid." I heard him and the rest of whoever was in the booth laugh and he said that anything he said could get him into trouble, and then asked if I wanted to do a rehearsal just to get a feel for the teleprompter.

I remind myself to talk way slower than I normally do (so, you know, probably still a little too fast) and deadpanned a few of the jokes, and noted that Charlie Sheen filed for divorce today (research, ya'll!) and threw that in there for his segment.

The writer/producer who shook my hand laughed at my Hitler joke (trust me, it's funny) and when I was finished, they all complimented me on my writing (score!) and my read (awesome!). "That is exactly what we want!" the director said, "let's shoot this next one!"
"Was I talking too fast?"
"No, it was perfect!"

Someone else was talking to him in the booth and I could hear her. "Do we want to go in for a close up?"
"I spent a lot of time on my makeup today, so I don't mind if you want to go in closer," I said, and that got a big laugh. But I was done. They loved my work.

So, even less than I thought: One rehearsal, one take.

The runner walked me out of the building. "Seriously, that was so good!" he said.
"Was I the best one?"
"Top three!"

Top THREE?! Who are these other two bitches? I'll bring em down!!! I'll fight them to the death!

The runner said that as far as he knew, the reels would all be edited tomorrow and sent to the network at the end of the day. They're working really fast. When I had spoken to my manager about it, I believe he said that they're going to be shooting the pilot on the 18th.

We'll see if the network wants to work with me. I hope they do. Keep your fingers crossed. This gig would be absolutely perfect for me.
at 10:54 PM