I DID Take a Picture!

[The bright bulbous white sun on the right is actually a chinese lantern. I believe they call them  China Balls. And clothespins on set are called C-47's. Rumor has it that was the catalog number for them back in the day...] 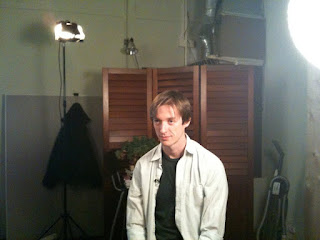 So I did have one picture that I snapped of Tyler Seiple playing the role of Ben in a confessional for the pilot webisode yesterday. Although his character isn't introduced in the pilot yet, we were able to have him come in and improvise a little bit so that we could put a few things together for a sizzle reel. Tyler was fantastic and made sure to hit character plot points. We almost died laughing when he explained how he plays a nose flute. His character is the unlucky in love puppy dog who has a huge crush on Afrikaa. Isn't he darling?