I Can't Help But Make This Face 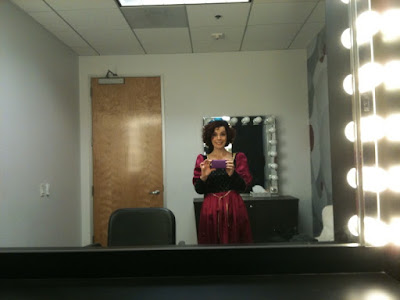 When I make this face, it's cause I'm ridiculously giddy.

I'm at the Comcast building on Wilshire (across from the SAG building), which, at noon, becomes Food Truck Mile. I saw everything from Korean Bbq to Thai to Grilled Cheese to Vegan. Amazing! At any rate, G4 called me on Tuesday asking if I could do a quick sketch with them the next day. Or course I can! This is actually the fifth time they've brought me on. I had absolutely no idea what to expect, I just knew I was playing Maid Marion and didn't have lines.

I arrive early and get into makeup. Then, the makeup artist asks her partner, "Should I put the blood on now, or later?"
I find out that Kevin Pereira, is playing Robin Hood for a quick sketch poking fun of the new movie and uses his bow and arrow to shoot bad guys but ends up hitting Friar Tuck and Maid Marion by accident. True Attack of the Show humor!

I found the sketch online, (blink and you'll miss me) but just so you know, the last line Friar Tuck says is a joke Kevin makes on the show whenever someone starts singing.