The Roller Coaster I Put Myself On

It was such a strange thing last week, when I was notified that I had been put on avail last Tuesday. The entire commercial audition process was really fast for this one in particular: audition on Friday, callback on Monday, being put on avail Tuesday (having to clear your schedule for them in case they book you) for Wednesday through Saturday. Now, I had been told that I was only going to be needed for one day so I was pretty sure they were going to call me Tuesday night to book me and let me know the date I was to film. They didn't. They didn't call Wednesday either. I had given up my two most lucrative night shifts at work so I could shoot this commercial and ended up not booking. KFC cost me money! So, after riding a very long emotional roller coaster, I had finally made peace with not booking it (and writing an article here and on Backstage about my mourning process). Then I get a call from my agent. I'm booked for Friday.

Now, I have NO idea how much money we're talking here, so I asked my agent what I could expect, and he said I could expect my session fee. The only thing I would be guaranteed at this point is the money I'll make for the day of shooting. "I've had some clients tell me that now they can quit their day job, and I would just hate to get anyone's hopes up about this. But, if they run it, if you haven't been cut out of it, and if it runs for 21 months, [which most fast food restaurant commercials don't] you could expect to make a lot of money." "Okay....how much is 'a lot of money'? Cause to me, 50 bucks is a lot of money." "You could make a lot of money." he reiterated. So still, no clue. And it's bad manners to talk about this kind of stuff, but when you've been a struggling actress for as long as I have and unable to go to family events because you can't afford to, money is a big deal. 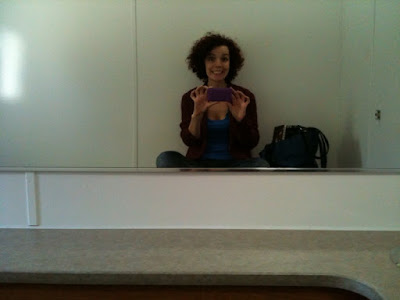 This is me in MY TRAILER! I'm feeling pretty fancy. I'm actually splitting it with my co-star, the lovely Jena Romano, and the first thing we said to each other after exchanging pleasantries was this: "So...do YOU know what we're doing in this commercial?" All we knew was that I was Theater Woman 1 and she was Theater Woman 2. That's all we knew.

We go to wardrobe, we get our makeup done, we drive over to our location, the Los Feliz Movie Theatre on Vermont and we're told that we're two girlfriends who have just seen a movie and one of us will say, "That was so good." Which one of us will say it? "I'll go find out for you," says the AD. She walks over to the 1st ADs and he asks her which one of us is going to say the line, and she replies, within our earshot, "The better actress."

Jena and I looked at each other and cracked up. The better actress? Really!? We're just dressed up and getting paid to play pretend. Anyone can do this. Okay, maybe not anyone, but this isn't microsurgery. They still haven't told us who is saying the line as we do our first rehearsal, so we agree to switch off on each take, and let the director eventually choose. After two rehearsal takes, the director has me say the line, and has Jena agree, "So good." So yay, we both have lines! Six more takes, and we are DONE.

Wha!? We're DONE!? Already!? We were the third location on a very long day, the crew was tired, and either we totally aced it, or they just wanted to go home. Either way, just please don't cut us out!

It's still early. We were called to set at 5 and it was only 9:30. I asked Jena if she wanted to go grab a drink so we did. And let me tell you, I still had my makeup on, we had just wrapped on being paid to act, and I was feeling FANCY! When I had left my apartment at 4:30 for my call time, I squealed, not once, not twice, but Three Times, "I'm Not Going To The Restaurant!" I was so happy. I've been going to work at a restaurant on a Friday night at 4:30 since I graduated college. It felt so awesome not to be, and to be getting paid to act instead.

So I went out and bought those shoes I had seen to celebrate. 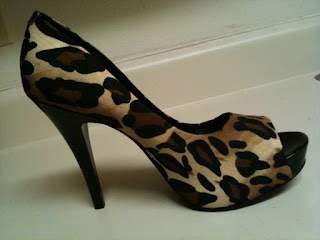 And thank you to ALL who told me that everything was going to be okay. You were all right! <3
at 11:20 AM