I've never been to Comic Con before. I was always afraid of it. Large crowds, nerds, nerds dressed up  with their faces covered so they can commit crimes and get away with it...

Clearly, this slightly claustrophobic dork forgets that nerds are only violent in video games, but still. Comic Con never seemed like my idea of a good time.

I carpooled with Phoenix and the Boy She Adores and went down Friday night and here's a few pictures of what San Diego was like. 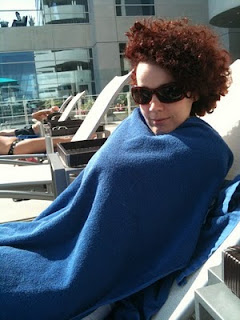 San Diego was cold. I think it got up to 68. Here's me poolside. I am wearing a bikini. And a terrycloth sleeveless Snuggie, also known as a towel.

I brought tank tops with me, cause you know, Southern California is usually very hot in the summer, but the weather was wacky. I wore a zip up hoodie all day and a jacket at night. And for the most part, I was still cold. But, well, I'm always cold. I should probably have more iron in my diet.

The only reason why that person behind me is laying out all normal like, is because he is probably from Alaska. And 68 is tanning weather over there. That's the only reason that makes sense. I mean, look at my hair! It was windy too! 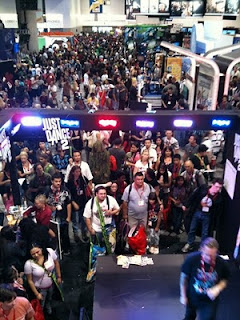 Here is the view from the G4 stage. There is a crowd at the bottom for the new video game, Just Dance 2, but as you'll notice, they might not be crowding the stage so much as just trying to walk through the sea of people. Comic Con is a big deal. Everyone is there. EVERYONE. And I never went to the second level of the convention. where all the panels are.  I stayed on the bottom level. My guy would grab my hand so that we wouldn't lose each other through the throngs of people, and I am proud to say, I never got lost! I know that is something most 4 year olds are proud of, but seriously, there were so many people!

And a lot of them dress up. It's kinda like Halloween. You see Super Mario characters, anime princesses, the Joker and Harleyquin, and one couple even dressed up as Carmen San Diego and Waldo. Never have I been more proud of finding those two, even if San Diego seemed to be an obvious choice to start searching for Carmen.... 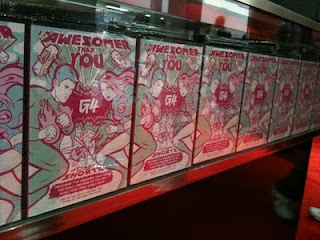 On the first floor of the G4 stage, they had merchandise! Limited edition tee shirts and sweatshirts, and THIS dvd over here. It's a collection of their most awesome clips, and I thought hmmm....when I saw it. I asked to see the back of the dvd to see what clips were featured, and yes, there were a few of the ones I did not only for Attack of the Show, but also for X-Play. It's fun to go to a huge convention and then see items being sold that have your work in it. So that was a treat.

We rolled back in late yesterday afternoon, and the trip was great. I'll probably go next year.