When I arrived on set at 6am, the breakfast truck was already there and catering had been set up. I could have anything I wanted! I LOVE sets with good food! There was lox and bagels on the table (being half Jew, this always makes me giddy) but I absolutely could not pass up a breakfast burrito (with avocado and bacon!) I think it's a rite of passage into the adult world when you glorify everything you ate at an event.

I ask the 2nd AD for a copy of the call sheet as I had never gotten one. His eyes widen. "You never got one?" I had replied that I was called with my call time and the name of the shop we were shooting at, and the name of the place I was to park at, but never got a call sheet emailed to me.  It was lucky I lived in the local area and had a brain cell to google addresses, so I was on time and ready to go. Oddly enough, this started me off on a fantastic foot; I was resourceful enough to get where I had to be at the correct time to not eff the production team and make them look bad in front of their clients, who were also at the shoot. The producer and director of the shoot were extremely thankful. That one small oversight could've cost them a ton of money and their reputation. So, lesson to all actors out there: Be resourceful! Mistakes happen all the time.

I hop in the makeup trailer when the makeup artist is ready for me and she comments how young I look. After she's finished, she judges her work. "Makeup really ages you," she said. Ha!

My glasses are super cute! Purple! Rented from Old Focals in Old Towne Pasadena. Costume designer Tira (yes, we rhymed) picked out three pairs for me to try, and they were all awesome. Definitely going to go there when I buy new frames. 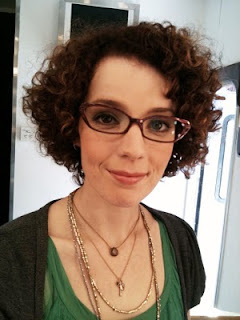 Don't I totally look like I own my own baby boutique?

This is one of the few shoots where I really LOVED my outfit. So, yay Tira Howard! Thank you!

I wish I took more pictures to show you guys, as the baby store was just so super cute. The production designers went all out making the store pop with color and fun bright colors and butterfly mobiles. I just hate taking pictures when I'm on set and need to be available the minute they need me.

At lunch (seared ahi tuna!!) I sat with the director and producer, as we had been shooting the shit the entire time I had downtime, and the producer asked if I would like to be part of the short both he and the writer wrote together. YES! He broke it down for me. I'd be the lead. Well, me and a MUPPET. (!!!) And the story is pure awesomeness. Once they get financing he'll call me. (See? Being resourceful earlier really did help!)

After I wrapped, I called my agent seeing if the casting directors for the audition I had that day would still see me. They would! I drove home, changed outfits and dashed off to my HBO promo audition.  I felt so Hollywood.

No wait. I felt so Working Actress.