I used to not celebrate Mother's Day.

I felt so angry, cheated.

We moved my mother down to Los Angeles to be close to her sister and me. My father's conservatorship over her transferred to my aunt after the divorce, and I am being groomed to take it over when my aunt retires. Once I can get bonded. Once I have a more steady source of income. Once I understand how the court systems work with her estate, the laws regarding her person.

My mother hears voices. Somewhere within the chemistry of the 14 pills she swallows everyday, is Stargates into her brain. She is more lucid, more conversational than she's been in years. When I hug her, she hugs back. She says, "Thank you for visiting." These are new as of 2010. She had not volunteered a hug for me in 20 years and I had to learn how to hug my mother all over again. Something every other daughter knows how to do, and with no effort, I had to learn. What is too tight? What is not tight enough? I am getting better.

For three years it was difficult to visit her because she believed that women were no longer allowed in restaurants. The first time my future husband met her, my father drove us to pick her up at her care facility, and my dad walked with Anthony to the Starbucks and bought coffees for everyone while we, the women, stayed in the car.

Two years ago, I told my mother that President Obama changed the laws so that women were allowed back in sit down restaurants. That he was progressive, and that it would take effect in as soon as six months; that now, women were allowed in fast food places. That I could buy her a milkshake if she came into the Jack in the Box with me to celebrate the new laws. We sat inside and she ordered a smoothie. A huge victory.

She does not like crowds. I try to visit and take her out during the week so that the Starbucks nearby isn't filled with high schoolers, people just out of church. She likes the grande Cinnamon Dolce iced latte with whipped cream, and she asks me to ask for a spoon so she can eat the whipped cream first. 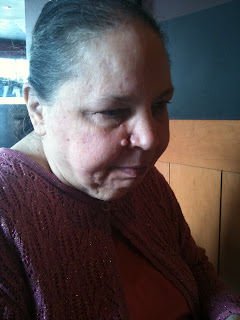 She does not like crowds. I take her to the tiny hidden neighborhood park and we sit and watch the few children on the swing set.

She does not like crowds. She has decided that coming to my wedding will be too much for her. I will make sure she has a very lovely album so I can show her and tell her all about it.

This is my mother. I took this picture of her yesterday, on my phone. You can't tell, but her hair is getting long now. I brushed her hair for her and put it in a ponytail. She cares about her appearance now. She likes to have her hair done when we go out. This very small thing for others, a huge victory for us. She is getting better. This is, and could very well be, the best she'll ever get. Until her body chemistry builds a tolerance to her medicine in as little as another year and she gets worse, bit by bit.

This is my mother. She looks beautiful, contemplative, wise. She looks like she could be reading a newspaper, or solving a crossword puzzle. Maybe writing her third novel. I caught her in the middle of something very important.

This is my mother. I am beginning to look more and more like her. You can't see it, but she has the greenest, most beautiful eyes.