Why DO I Do This? 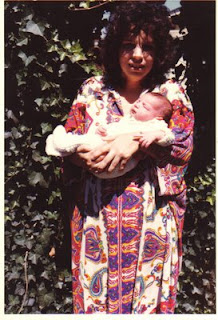 Boston Blond said: "Let's talk about acting. Why do you love it? How did you know/decide you wanted to do it professionally? Tell us." Welllllllll......okay.

First off, I should mention that this Draft has been sitting in my edit box for about four weeks now. Because there is a lot to cover and a lot of it is sad.

I used to have a theory that all actors were wounded birds. There we are, wings aflapping, chirping our heads off because we're in so much pain and we can't get off the ground. If only someone could see us! If only they could help us!

This is a photo of my mom holding me. I owe a lot to her. Mom had three kids under the age of 5 at 39 and we believe she suffered post-partum depression after my little sister was born. I remember walking to the car to go say hi after my dad brought in my sister for the first time for us all to meet her. Mom was still exhausted and sitting in the car. I asked her why she wasn't inside with the rest of us. I don't remember what she said, but I do remember toddling off without her, thinking, as young as I was, hmmm, that's strange.

She suffered her first nervous breakdown three years later, when I was six. And she never recovered. I remember visiting her at the recuperation place they put her, where she was to stay for three months. My exhausted father took us one weekend to see her and I hadn't seen her in so long that I ran up to her and hugged her with all my might.

She did not hug me back.

So in my mind, one day my mother just stopped loving me.

And when you're six, all you can think is, "what did I do to make her not love me anymore?"

This would've been a good time for child therapy. None of us three kids went. Hospital bills were skyrocketing and my dad was shuffling from home, to our grandma's to drop us off, to work, back to grandma's to pick us up, to home to sleep, and all over again. My dad got gray hair that summer.

My brother probably took it the hardest at first. His behavior problems went WAY up and he took out his anger on my sister and me. He developed OCD, but back then, we just thought he was strange. If we were all lying on the floor watching tv and we walked over him to go to the bathroom, we HAD to walk back over him when we went back to our spots, otherwise he would freak out. He was violent. I told teachers who asked that I got bruises from being clumsy. My family was messed up but it was the only family I had. I hated and loved my brother at the same time.

My sister was too young to remember our mother before she got sick. She was always very sensitive and clung to me, copying me, following me and doing everything I did because I mothered her. I protected her as best I could.

When I was 12, I had written a will and decided I'd probably use razors in a warm bath. I was so unhappy, so sad, so depressed, and we were so poor that I knew my family would be better off without me. But then one day I came downstairs and saw my sister watching tv. And I knew, I knew I had to keep protecting her. That without me, who knows how badly our brother would beat her.

My brother was doing poorly in school, my sister had a learning disability, but the attention I got from my teachers were all so positive, so rewarding, that I excelled more and more. Because I knew that if I was a good student, my dad would be proud, that if I was good, he would continue to hug me back. One year, my sister was in 2nd grad, I was in 5th and my brother in 6th. I was so excited about my dad going to Open House at school, because I had written an essay about how my dad was my hero, and I knew he'd see it. He came home after it was all over and I asked him excitedly if he had talked to my teacher. "Aw, honey, I didn't go to yours because I know I don't have to worry about you."

I was the good kid. I had to be. If I was good, then I wasn't a problem and my dad would still love me.

At 12, I saw an audition notice for the town's kids' community theatre and I begged for my dad to take me.

Finally! People were paying me attention! Oh my god, I can breathe! I AM somebody! Attention from other people validated my existence and gave value to my worthless life. I was 12. I needed this. I needed people to give me this because my mother wasn't and my dad knew he didn't have to because I was his good kid. Suddenly, people, people I didn't even know loved me. I am a wounded dove, my wing is broken. But people can see now I'm hurt. Maybe they'll help me.

I was also very good at writing. Seriously, my fiction isn't bad, and I almost majored in creative writing. I got a lot of attention from this too. One teacher accused me of plagiarism and I was so flattered, that "Thank you!" was probably not the response she was anticipating. Once I moved into advanced English (seriously, Hopkins, why wasn't I there from the START?!) I wrote. And I wrote and wrote and wrote and wrote a play that I got to direct for my Drama 3 class in high school.

Because I was always smaller than my brother, I learned early on that words were going to be my weapons when we fought. And my written words gave me a voice which could be heard farther than I could ever shout them.

I was still writing creatively in college and when the theatre department decided to put on Hamlet and Rosencrantz and Guildenstern are Dead ( a total of 4 female lead roles that semester, when over 30 were in the dept.) April, Tracy and I said, eff this, let's write our own stuff, produce it, direct it and give us ladies a chance to be heard and seen.

No one believed that we could do it. But we did. We 3 little ladies had an all female cast of 27 and SOLD OUT EVERY SHOW. We had to turn people away! We collected just shy of $1,000 which we donated to The Transitional Living Center for Abused Women and Children of Fullerton, CA, which helped abused women and their children get out of their homes, their relationships, and gave them a place to stay, live, train for work, etc. And that show was the reason I went to that school. I didn't know it as a freshman, but as a senior, after that show, I thought, no I knew, that THAT was why life led me there. I had written 3 major pieces that were audience favorites, one a scene where 8 year old me is checking for bruises on my 5 year old sister, where she asks me why God let's all this bad stuff happen to us and another where I confront the demons of being a neglected daughter and being scared as hell that I am going to also have a nervous breakdown and be abandoned. (see? ISSUES!)
Our audience cried. People who did not know me cried. People I never met were affected. People I never knew had the same thing happen to them. And it hit me that I'm not the only one to have hurt like this. That I'm not special in my pain; that EVERYONE can relate to my broken wing because we've all been too hurt to fly at some point, or multiple points in our lives.

We had a Q&A session each night after our show, because, why not? And every single night someone different would thank us for putting a show like that together, and one night, a lady said, "If there was one thing you would want us to take home with us tonight about your show, what would it be?" April and Tracy both looked at me. "Take all the hurt you've ever had, all the pain, and turn it around and create something beautiful." I said.

We go to the movies, to the theatre, to escape our own troubles and watch someone else's so that we can relate to our fellow human beings. We want to FEEL. Things. And if I can make you FEEL something different than the feelings you came in with, I did my job. I affected you. I am relating to you. I too have a broken wing.

And with all the hours of therapy and self-help books, I like to think that I'm getting better.

And I just happen to know a great veterinarian, and I am going to scoop you gently into my cupped hands and take you there. And we'll both get fixed, together.
at 1:03 PM