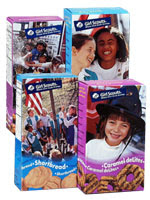 It's Girl Scout Cookie Time! I saw a co-worker passing around the cookie sign up sheet last night. I know there are a lot of Thin Mint fans out there and I think you're all crazy. Why have a cookie that tastes like you just brushed your teeth?  I love the Samoas, as it's the cookie that just keeps on giving. You have one and ten minutes later you find a piece of toasted coconut still in your teeth. Bonus!

I was 19, walking to my classes when I saw a Girl Scout Cookie stand with three adorable girl scouts (wo)manning the booth. I want one! I thought to myself. I want one of those girl scouts!

And since I'm older now, I REALLY want a girl scout. I want a little girl with dark brown eyes and long lashes who looks just like Antne minus the goatee. I want to teach her how to sew a button and finger paint pointillism and how to also sell her own cookies she made herself so she learns how to run her own business as an entrepreneur as well as working together in a team earning patches.

I visited my bipolar schizophrenic mother a few weeks back and mentioned that the loud ticking sound isn't from the voices in her head but actually my biological clock. "Don't get married." She said. "Screw marriage, Mom, I want a baby!" "Don't have kids." "What? Why not?" She smiled, "They ruin your life."

I would get her Thin Mints to pay her back, as in, here! Have some gross cookies! But those are (oddly enough) her favorites. And that's why people who like Thin Mints are crazy.
at 1:40 PM