But at least she was good in the movie I was in.
Still haven't popped in my DVD just yet. I'm waiting until tomorrow night. Ooo, the anticipation. Here's what Fangoria had to say: 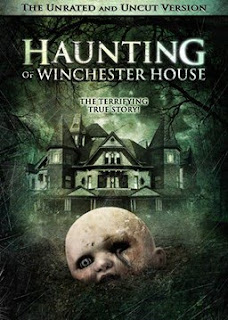 Also arriving on DVD this week is an indie ghost story served up on quite the traditional platter. HAUNTING OF WINCHESTER HOUSE follows a young family who move into a mansion to act as temporary caretakers. An immediate assault is launched on the trio by ghastly forces within the home. Susan (Lisa Kellerman) and Drake's (Michael Holmes) daughter Haley (credited in the film as Barry Womack, credited all over the net as Patty Roberts) is kidnapped by a mysterious wench of a ghost and held captive somewhere within the house, sending Susan and Drake into an understandable frenzy as they tear the place apart searching. But what they find isn't Haley, but an assortment of spirits, and they've got business that Susan and Drake must help finalize if they hope to ever see Haley again.

My first point of notation is Mark Atkins and his clever little script. Mark goes above and beyond with this tale, infusing a handful of plot twists that have all admittedly been used before, but seldom used together; To see them all successfully incorporated into one picture is impressive. When you think you've got the whole story figured out, count on Mark to toss another two monkey wrenches in the fold, and it's a good thing too. The attention to detail is what helps distance HAUNTING OF WINCHESTER HOUSE from every other haunted house story on the open market. Unfortunately I can't honestly praise the cast as a whole, but I can give a nod to Lisa Kellerman and Tomas Boykin for anchoring a somewhat shaky ensemble. Finally, I must say the score, composed by Chris Ridenhour makes for a nice final layer of frosting atop this cake of chills. All in all, it's a fairly tasty treat.

DVDetails
DVD extras include a brief behind the scenes featurette and two deleted scenes.
at 9:44 PM