I'm going over the contract from the manager I met with last week. and I've got a hair modeling gig on August 10 in Santa Monica, and all I can think about is.... Blond. 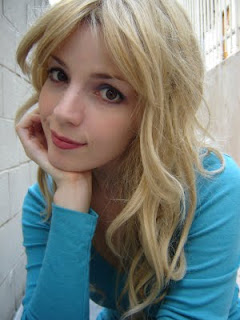 Every woman should go blond at least once in their life, right? Shakira did it, Madonna did it and does it now, Scarlett Johanssen did it, Lindsay Lohan did it, Jessica Simpson does it, I mean, come on! I want to be blond!

My sister grew up blond!

Oh the itch to go blond has really struck me for some reason. Why? Cause it's summer and it's hot and my birthday's coming up and I want a change? Is it because I am happy with my hair length and want to grow it out more, so I can't hack it off like I wanted to just last night, so going another color I've never been seems like the only logical choice?

And I'm so pale, so many people have said I'd look terrible as a blond, but I had to wear a blond wig for a Dixie Chicks tribute song (Ready to Run, bitches!) and I swear I was more harassed once I put that darn wig on. And struggling actresses LOVE attention.

Is it because almost every gosh darn breakdown out there is looking for a BLOND?! Is it because Patty Roberts went back to her blond natural color and now I'm hankering for it too? Is going blond infectious?

I'm bored, I think. I want a drastic change.

Plus, if I went blond, and then red, I could go a very nice strawberry blond. Just ask Ashley. She's in the coloring biz world. In fact, maybe I should just ask her!