We finished our pick up shots for The Haunting of Winchester House technically this morning at 1:15am and Michael Holmes can now go cut his hair! When I wasn't staring at his chin, I would catch him twirling his long hair around his fingers, just like I do to mine when I'm bored, nervous, happy, or sad. And then I would make fun of him, just as any good friend would.

I walked into the Asylum's warehouse studio in Burbank, got into costume, noticed half of it was missing, alerted them someone would have to go to Target to buy new pants for me "for continuity," (which trust me, when you see the film, you will have fun picking apart where the film doesn't match or make sense. For instance, we never shot the bathtub scene where my character changes pants. So for no reason at all, Susan goes from jeans to yoga pants. And gets a bleeding wound on her arm from out of nowhere. Ahh, indie film making...)

When Tomas Boykin came onto set, he took a look at me and Michael and said, "It's so good to see you guys." And you know what? It really was! It was so great to see them both! We had so much fun during the exhausting, time-warping nocturnal shoot and I forgot just how much I liked them both when I wasn't around them for 12/24 hours for 12 days. And since we were all wearing our same costumes that we wear throughout the film (except for my never explained change of pants) it was like no time had passed! They are My Guys!

We were doing all our pickups, all the scenes we didn't get to, or coverage we never picked up, in front of a green screen, which the director will then have to compostite against stills of the house and...you know what? I really don't know how it's all gonna happen and work, but let me just say it's HOLLYWOOD MAGIC!
It was a bare bones crew. There was the director, Erica on script, a Production Assistant on slate, DB on whatever and another Production Assistant who left early. And us. And only one microphone. No makeup artist (I had to match a professional's work.) No sound op (hope the sound carried the other person who wasn't miked!) and no 3D camera. It was a regular camera. Will it match up? Hope so! We had to shoot the climax of the film this way. Hope it's good! Hope it makes sense! Oh man, how I hope everything comes together!

DB was all up in the director's grill about time until finally, the director was like, DB! We're gonna go over the ridiculous time limit you imposed for no good reason so that we can do what we came to do: finish the film. I was like, Fuck Yeah Director! Cause DB is 19, never went to film school and somehow didn't develop people skills. 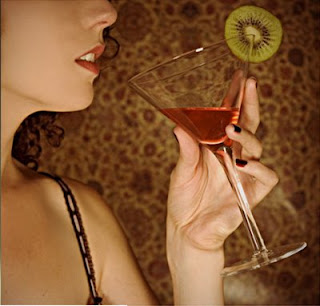 Right before the Martini (the last shot of the day, cause "the next shot is in a glass!") the director asked us if we wanted a five minute break, and Michael said, no, let's DO this! And we did. I held him against my chest as he coughed non existant blood into my lap, scraping the heck out of my exposed skin above my tank top, and I cradled him as the ghost lady threw stuff at me that I had to duck under, with the fans whipping my hair in my face, with me screaming full force. And then We finished. We finished!

So go ahead! Reserve your copy on Netflix RIGHT NOW! I'm told there's going to be behind the scenes footage (uhm, nervous about that one. They caught me on a very scandolous rant that I'm hoping does NOT make it to the dvd extras) as well as director commentary and bloopers. It should be a really fun C horror movie.

In fact, it will be a really fun drinking game: Take a shot everytime someone yells the other's name.
at 4:15 PM