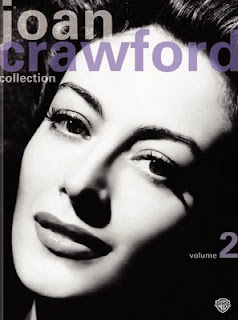 Well, okay, maybe I do. I've been working out more than usual this year and I've lost some of the baby fat that's been on my face since I was, uh, you know, a baby.
And we discovered, hey! Elle has cheekbones! And I've been compared to a LOT of dead starlets from the 30s and 40s in the last three months. Especially Joan Crawford.

I mean, I guess I can sorta see what people are talking about. This guy who paid me the Joan Crawford compliment was the assistant (?) to the casting director. He had me do a quick read of my 1 page sides without the cd in the room. Why? I don't know. That's unusual. At the very beginning, he told me that the girl before me had done something really surprising with her read that he really liked.
"No pressure!" I said.
So I did my take on it, hitting all the beats I wanted to. He said he thought it was perfect, unless I wanted to read it again before he brought in the cd. "No thanks, I think I'm ready." I said. Why waste both our times, if you're not going to give me a direction to somehow change it?

So in came the cd. I did my same read again for the camera, and she said she thought it was great, and that she had no notes for me, but would I do it exactly the same way again, because she knows the director is going to want to see a second take.
I wish I could've said, "Why would he want to see the same exact thing again? Couldn't he just rewind the tape? Why don't you give me a direction so he can see I can take notes?" but instead, I just smiled, punched up a few physical gestures to make it a LITTLE different, and then thanked them and left. The cd said, "That was really good."

But of course, it's really hard to believe that when lately, that's all I hear and still never hear my phone ring.

Whatever. I sorta kinda look like Joan Crawford, but not really.
at 3:24 PM