Some People Don't Have a Clue 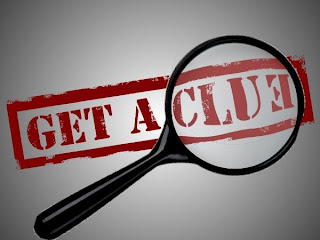 There are a lot of people in LA who think, "Gee! I could make a movie better than this!" And then they fail. Miserably.

Because even though you're creating something to make you money, it's still art. And with art, you have to have a few rules, yes, but you also have to know how to bend them and be open to other things. For instance, if you're looking for a Caucasian actress to be a white supremacist with tattoos, you probably want to stop there. But to go on, saying she can only be 5'8, that's a little silly. Being specific about having no facial tattoos....well, that's just retarded! If you are going to stick so stubbornly to the idea in your head and not budge on a few things, you will not be able to budge when real life obstacles happen to your film. For instance, an investor realizes that there's no money in indie films and takes the money he promised you with him. Or the Burbank police shut you down because you don't have a permit. Or your friend who's playing the lead can't cry on cue. Or the sun went down before you were able to get your last shot. You have to be quick thinking, flexible, and OPEN to changes, revisions and improvising on everything! If you can't do all this from the very beginning, you are setting yourself up to fail.

And even though you need to start all that from the very start of preproduction, you're absolutely doomed if you can't get to that point while you're starting casting.

This is a real breakdown for an indie film:

I mean, seriously. Because, I love getting semi nude, and I've got tons of upper arm tattoos, but gosh darn it, I have a burning cross tattoo on my face, so they wouldn't want me, I guess.

Need Actors or Actresses. This is a student film. The film is Non-union. The pay is food. The lead role is not committed yet. You basically chase another person.
Filming will either take place this Saturday (3/28) or next Saturday (4/4). Likely will be a full eight hour day. Details are sketchy at the moment.
This film involves running, reaction shots and some falling down.
E-mail me ASAP if you want to be fed.
This is a student film and I am looking for quality actors. This project should take one day to shoot. Either this weekend or next (I am stilling working out the permits). This is mainly action with a few lines of dialogue. Each role will have to run and have one reaction shot.

And it's important to do your research:

If you want to make movie and you have no idea how to do so, hire people who do. They'll give you a clue or two so you can have one of your very own.