I Had A Dream About Leeches 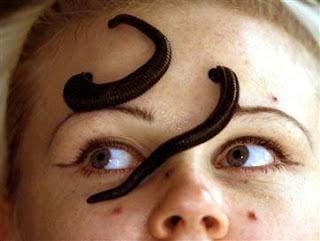 Did you know I was a co-host for a show about relationships for the last five months? The show aired live every Wednesday on the internet.

But let me tell you something I DID do.

When I got the contract, there was no exit clause. So I had one put in. That's right! I played that card saying it was nothing against the show but because of past experiences, I needed to make sure that I protected myself. I've done enough non-union shit to know that the contracts are only going to be in your favor if you MAKE them in your favor.

(If you book anything non-union, put the clauses in there yourself that you're going to work no more than 10 hours per shoot day, that you will get copy, etc. Protect yourself! You're your own business!)

The Host of the show never made it clear what my duties were as co-host. I was just, as far as I knew, supposed to be myself, giving my "feminine perspective" on what he was saying. Sounds like fun right? And it was.

And we would have meetings every once in a while, but I thought it was strange a few times, when he took me out to dinner, for what I assumed was to be a business dinner. It wasn't. He told me to put away my notebook and that tonight was just for us as friends. On one night, he took me up to Griffith Park to see the stars. He then gave me instructions on how to give a proper hug. Apparently, I have been doing it wrong all this time.

And I think that's where the relationship started failing. I never quite knew if we were friends or business associates. And he would get very put out at times when I refused to "let down my walls." Basically, I refused to talk about things that were none of his damned business.

He hired on a producer to help us get the show to where he wanted it to be, and this producer was (and still is) very excited about the show. He is a swell guy. Really great and easy to get along with, and more importantly, knows his stuff.

One night, the Host of the show was being....feisty. It was strange. So I just thought, okay, let's go with that. We're live, so I'll just match your temperament here. I flung jabs at him back.
On the way home, I was completely taken aback. All of a sudden, the host turned a 180 on me and poof! the good Doctor was now Mr Hyde.

I called the producer asking him what the hell I did to make the host so angry. And the producer was all on my side about it. "You didn't do anything but react to how he was treating you." And he told me he had told the Host that. The Host was PISSED at me for some reason we were never really able to figure out. I was told by someone associated with the show that perhaps because I was so flirty with the Host on-air, he was angry when he realized I was never going to sleep with him. I thought that was on the ridiculous side. I'm a chubby size 6. Who wants a piece of that?

But then, two weeks later, while live on the air, when I mentioned how I indeed was the perfect woman, he said, "You're not perfect, otherwise you would have slept with me."

Suddenly I was catching pop flies in left field. Whoa. I mean, what?!

Was that there all along? Am I really just a naif?

And that's when I realized that I couldn't trust this guy. Not that I couldn't, that I didn't. Where were the lines between us being professionals on a show and us being friends? I didn't want to be friends. I never did. He hired me. He was my boss. And that's where I thought the relationship should stay, but I believe there was a struggle from him to have me be something more. Not necessarily sex, because who knows, but maybe he wanted me to be a confidante, something I felt would have been inappropriate.

I was dreading going to the show; because I didn't trust him, I didn't believe half the things he said. Which, well, was probably obvious on the live show.

I wasn't right for the show anymore. And this last Wednesday night, he gave me my walking papers, stating that he was going to exercise my exit clause.

Oh, the relief! I was smiling the whole entire 30 minute drive home. I didn't realize how heavy the show had become on my shoulders.

But I was still contractually obliged to finish up my last three shows.

And last night I had a dream that leeches were affixed to my body and I had to get them off.

I am a big fan of interpreting my subconcious.

I called the producer the other day for a post-mortem, getting his voicemail, and he returned my call this morning. I told him that the show would be better off just having me finished altoghether, as my heart wasn't in it, and it was clear the Host didn't want me there in the first place. The producer completely understood.

And then invited me and my guy to a party he was having on Saturday night because I'd really get along with his friends too. And that we should have a couples' night with him and his wife.

So I'm going to go out on a limb here and say that I am still a good person, that people like me, and my relationship with the Host, whatever it was, had sadly run its course. And that happens. It just didn't work out.

And I am happy to move on to other things that suit me better.
at 1:21 PM